A French press coffee maker, also known as a “press pot”,  is often noted as a favorite among true coffee connoisseurs. 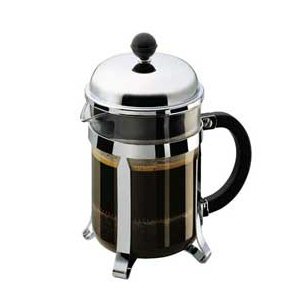 The reasoning behind this is because the full flavor of the coffee bean oils are preserved, making for a consistently delicious cup of coffee. The French press coffee maker is typically a tall glass that is fitted with a piston-like pump that moves within a cylinder and a filter. The brewing process takes only a few minutes as ground coffee and boiling water is combined in the tall glass and then pressed down. The coffee at the top is ready for you to drink. The benefit of using this type of coffee maker is that you can set the temperature of the water and vary brewing times to cater to your individual tastes. The French press method uses steeping which is said to extract the coffee bean oils and keep the most natural flavor of the coffee beans.

French press machines generally use a conical grinder, especially the higher end machines. The conical grinder rotates at lower speeds than other, resulting in a lower temperature that keeps the true flavor of the coffee bean oils. You also want to grind beans into large, uniform pieces so as not to drift through the filter. Cheaper grinders will likely not give you what you need. Conical grinders can give you a coarse grind that works well in a French press machine. While you can use any type of coffee in a French press machine, coffee experts generally prefer to use dark roast coffees that have a full body flavor. Coffees with low acidity is also preferred.

French press coffee makers are widely available and vary in size, including 4, 8, and 12 cups. With the French press style of coffee makers, grinders are a critical accessory that can make or break the coffee machine. Frequent users suggest splurging on a high-end grinder to ensure the beans are ground to perfection before being used in a French press machine.