If you’re tired of grinding coffee for your morning cuppa joe, then we suggest using pods. Pods have been around a while and are essentially a quick and easy replacement for making grounds from your beans. Using pods has become very popular for single-serve and 2 cup coffee makers.

Senseo coffee machines are generally though of as being single cup coffee makers, but they make a two cup machine that brews under pressure while using convenient pods. Some of its other positives aside from the fact that it uses pods are that it also has a fast brewing time. The only negative is that it may be a bit loud. 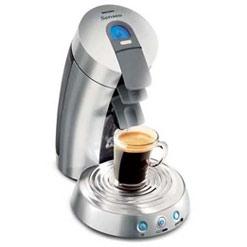 Senseo is manufactured by Phillips and their two cup pod machine has a deeper filter that holds two pods for two cups. It comes in white, blue and black. It features a sleek modern look. Instead of being a drip coffee maker the Senseo uses light pressure and thus the brewing process is faster. You can produce a single cup within two minutes or less. It is quite simple to use as well. Just flip open the top and slip in a pod then close. The water compartment holds enough to last for several cups before having to refill it, so you have the option to brew one or two cups at a time.

Be sure to keep a supply of pods because this machine only operates with them. You cannot use regular loose ground coffee. When the brew is finished there will be a nice foamy layer on top which has a sort of luxurious effect.

The Senseo Supreme is a step up above the older model. It has a higher water tank capacity and adjustable brew amount. It also features a LED display and shiny chrome finish. Basically this newer version adds to the usability of the coffee machine.

You can still brew two cups at a time but with the new model you have control over the amount of coffee brewed per cup. This can be handy if the mugs you use change from time to time. The spout is adjustable as well which is helpful for taller mugs. The new LED display helps operation and alerts you when the water needs to be refilled. 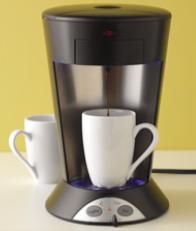 Another 2 cupper: the Bunn Black My Cafe Pod

Bunn Black My Cafe Pod is another coffee machine that uses pods. This machine can also make tea. It’s quick, brewing four to twelve ounces of coffee in thirty seconds and tea in fifty. It has the same type of operation as the Senseo plus uses tea pods. The control panel offers different tea and coffee brewing options with a lever to select the strength of the brew.

The water inside the reservoir is kept at two hundred degrees so you can instantly have a hot beverage. This can also come in handy when you need hot water for drinks such as hot chocolate or for foods such as soup. This machine features a pulse brew that simulates steeping which suits well for making tea.