French Press Coffee makers are one of the easiest ways of making fresh coffee and unlike some of the other more sophisticated machines they are cheap to purchase and easy to clean and maintain. Also known as a plunger pot, press pot or cafetiere, they are the most popular sort of coffee maker in Europe and Australia. This method of brewing coffee was invented in France at the end of the 19th century and has remained popular ever since. 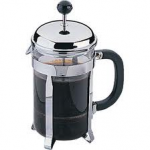 Using a French Press coffee maker is extremely simple. The coffee makers use any sort of ground coffee, whether freshly ground at home from beans in a separate grinding machine, or bought ready ground in the shops. It is important to use coffee designed especially for this sort of coffee maker as it is coarser ground than coffee for drip brewing machines. Using too fine a coffee may mean that the coffee grounds escapes into the finished drink. The amount of coffee which you put into the coffee maker will depend on the strength of the coffee itself and your personal preference. If buying a ready ground coffee the side of the packet will generally give advice about how much to put in the maker. As a general rule of thumb, one dessert spoon will make about one small cup of coffee.

Firstly, remove the lid and the plunger from the coffee maker and set it to one side. Put as many spoons of coffee as required in the glass just part of the coffee maker. Pour boiling water directly on to the coffee and once the pot is filled, replace the lid but do not press the plunger down. Leave the coffee alone to brew for around five minutes, then slowly push the plunger down to separate the grounds from the coffee. Take care not to push the plunger down too rapidly as this could mean some of the bits of ground coffee escapes into the cup.
Cleaning and maintenance
Caring for your French press coffee maker is very easy. Once finished the coffee, simply take the plunger and lid off the glass jug and pour away the coffee grounds. The jug and plunger can then be washed either by hand or put in the dishwasher. No regular maintenance is required, and should the maker break, it is simple and cheap to replace. There are no moving parts to go wrong, and the most common problem with the maker is that the pot gets dropped and the glass jug breaks. These sorts of coffee presses are available in a variety of different sizes depending on how much coffee you generally make, and in a variety of different colors and finishes.

1 thought on “How to Use a French Press Coffee Maker”