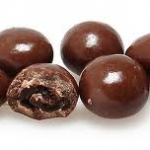 Chocolate covered coffee beans have become increasingly more popular in recent years, and they are popular with both coffee lovers and chocoholics alike. They are the perfect treat to nibble on or to give as a gift when eating at a friend’s house. Although it’s simple to go out to the stores and buy some chocolate covered beans, it’s far more fun and unique to make your own. Even though the chocolate used to cover the beans may be sweet and sugary, the bitterness in the coffee beans counteracts this and the resulting product may be far more bitter in flavor than a sweet treat. The coffee flavor is intense, and it may be too much for all but the most hardened coffee addicts. It should also be remembered that coffee beans are high in caffeine and the chocolate is high in saturated fat, so chocolate covered coffee beans should be a rare treat rather than a staple foodstuff.

Obviously, the two main ingredients used are coffee beans and chocolate. The coffee beans should be roasted and then have had their shells removed. The type of beans used depends on personal preference, and if giving as a gift it is better to go for a medium strength bean rather than a very strong one which may be overpowering in flavor.
All types of chocolate can be used to make the covering for the beans, with plain, milk and white chocolate working equally well. Use a good quality chocolate which contains at least 70% cocoa solids. This will ensure that the chocolate melts well and will have a great flavor when coating the beans.

Melt the chocolate either in the microwave on a medium heat or in a bowl over a pan of boiling water on the stove. Once completely melted, remove the chocolate from the heat and carefully drop the coffee beans in one at a time, ensuring that the chocolate completely coats the bean. Remove the bean from the chocolate using a small spoon, then lay on a tray to cool. Once all of the beans have been covered, put them in the fridge to harden.

There are lots of different variations on the chocolate covered bean recipe. One good effect is to build up the layers of chocolate by repeating the dipping process several times. Using both white and dark chocolate can build up a striped effect on the bean, or repeating the dipping several times with the same chocolate will give a much thicker coating. Half of the fun is experimenting and seeing what new varieties you can think of and which ones work well for you.