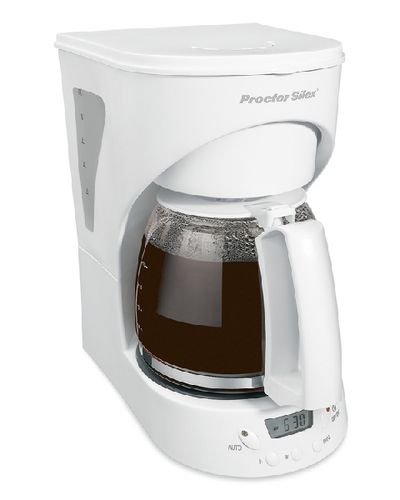 Proctor Silex has been making and manufacturing coffeemakers for several years. Proctor Silex is known for making affordable, long-lasting coffee makers which are long-lasting, unlike many other cheaper coffee–makers. Unlike other brands, they also make carafes that last a long time, making them one of the better brands of coffee makers.

And while the Proctor Silex coffee makers are cheaper, and much more affordable, they still come with a full range of excellent features that are more typical of expensive, higher-end coffeemakers, rather than the more affordable coffeemakers.

Most Proctor Silex Coffee Makers, like the Proctor Silex 46801 Simply Coffee model, come with a pre-programmable feature that you can tailor to your own needs – something you probably won’t find on many other coffeemakers at this price level. For this model, the carafe also pours easily, and has a ergonomic handle that makes handling coffee even easier.

Another Proctor Silex Coffee Maker, the BrewStation 10-Cup Dispensing Coffeemaker, is a much more stylish, sleek and minimal option, in case you’re the type to worry about the appearance of your appliances ruining the look of your flawlessly decorated kitchen.

The Proctor Silex BrewStation 10-Cup Dispensing Coffeemaker has all the handy features of a regular Proctor Silex coffeemaker – it makes 10-cups at a time, allows for mid-brew dispensing, has a lit-up on and off switch, with one major difference – there’s no need for a carafe. The BrewStation 10-Cup Dispensing Coffeemaker actually has an enclosed system that allows you to eliminate the need for a carafe, with the coffee brewing inside the actual machine itself. This makes it ideal if you have a history of breaking carafes! It also allows you to interrupt the brew whenever you’d like to grab a cup – perfect if you’re brewing for whomever you live with, but tend to leave earlier than them, and you want to get in some caffeine in the morning.

The Proctor Silex BrewStation 10-Cup Dispensing Coffeemaker also has a self-regulating heater, which helps keep from scorching or overheating the coffee, which often completely ruins the flavors and subtleties in the flavors of the coffee. Most Proctor Silex models are also dishwasher safe, which is a nice feature, even though the carafe is made of glass and is very delicate and fragile. Overall, the Proctor Silex is a fabulous coffeemaker brand – cheap, affordable coffeemakers, with plenty of fabulous features that are typical of more expensive coffeemakers.