Keurig coffee makers are a great choice when searching for an office or home coffee brewer. The name “Keurig” (often misspelled keiriig) is Dutch for “excellence” so the name does possibly say it all.

Like the Senseo single serve coffee makers, the Keurig coffee machines also are designed to make a cup at a time. Their appearance is sleek and modern as well as sturdy. They produce one cup after another in less than a minute of brewing time for each. Cleanup is quite simple too. One great feature is that there is no coffee to measure. Instead coffee comes in K-Cups which are small plastic cups with a measured amount of coffee in them already. They are also sealed to retain the flavor. Keurig coffee makers even come with detailed manuals that are so intricate they instruct you how to take the coffee maker out of the box. 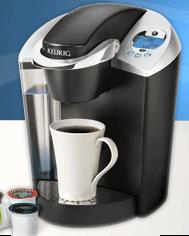 Making a single cup of coffee with a Keurig coffee maker is as simple as five steps.

First is to fill the water container preferably with bottled or filtered water but you can use tap if you desire. The water containers have a cap that can be removed or you can just remove the entire compartment and take it to the water.

Next is to simply open the top of the coffee maker and carefully place in a K-Cup into the chamber while avoiding the piercing needles. Keep the K-Cup sealed.

Once the top is closed, needles will pierce into the bottom and top of the cup and the LCD display should display that it is ready.

The fourth step is to select the amount of coffee you want. Choose either the large mug button or the small cup button.

Finally the coffee will begin brewing. Water will flow through the K-Cup and then into the cup. Once the operation is done open the lid and carefully remove the K-Cup because it’ll be hot. It’s as easy as that.

Generally the K-Cup holder and water compartment are safe enough for your dishwasher, but the lid is not. It’s recommended that every six months a water/vinegar mixture be run through the Keurig coffee maker to clean it. This process removes minerals that build up within the appliance. These minerals block the heating ability of the coffee maker.

As a matter of fact the machine will tell you when it is ready for this water/vinegar mixture by displaying a “De-Scale” message on the LCD. Some good news is that you can still make coffee even when it has “De-Scale” displayed.

If you want to store a Keurig coffee maker for long times without use just make sure there is no water in the water compartment and that the appliance is clean and dry, obviously unplugged as well. Keep it in a place that will not collect frost or contain moisture. You don’t want to expose the components to cold elements that will damage them.