Is Coffee Safe During Pregnancy?

Guidelines for what pregnant women should consume are constantly shifting and it seems that what is safe to eat or drink one week is on the banned list the next, and vice versa. In recent years there has been a lot of research into drinking coffee or other drinks containing caffeine to establish the answer to the question of whether or not coffee is safe during pregnancy.

One of the most reported studies in recent years was published in the American Journal of Obstetrics and Gynaecology in 2008 which found that women in the first trimester of pregnancy who consumed up to the recommended limit of 200mg of caffeine a day were twice as likely to suffer a miscarriage as women who had no caffeine at all in their pregnancies. This led to many doctors and obstetricians recommending that pregnant women, and especially those in the early stages of pregnancy, avoid coffee and other drinks containing caffeine completely. 200mg is roughly equivalent to 3 or 4 cups of instant coffee per day. If pregnant women are unwilling or unable to stop drinking coffee completely, a good compromise is switching to a decaffeinated product which will drastically reduce the amount of caffeine from about 85mg per cup to 3mg per cup. After the first trimester is over, at around 13 weeks of pregnancy, the risks of miscarriage diminish greatly and the effects of moderate intakes of caffeine on pregnant women is less clear. It is known however that a very high consumption of coffee (more than 8 standard cups per day) can lead to increased problems with stillbirth at any stage of pregnancy.

There have also been studies which link a large amount of caffeine in pregnancy with a lower birth weight. A large Norwegian academic study showed that mothers in later stages of pregnancy who drank over 200mg of caffeine per day were twice as likely to have low birth weight babies than mothers who stuck to the recommended limits or cut out caffeine consumption completely during their pregnancies. The exact reasons for these differences between the two groups is unknown, but it is thought that in later stages of pregnancy when the baby is growing rapidly, any effect of the caffeine will make a larger difference to the baby.

Many pregnant women find that their sleep is disturbed, especially when they are in the latter stages of pregnancy and their shape makes it difficult to get comfortable in bed at night. Sleep disturbance is such a large issue for many women that it is wise to take all steps possible to eliminate all the factors which could lead to sleep being disturbed such as noise, light and over stimulation by caffeine. Peta Dunia . Coffee should be avoided in the evening if sleeping is difficult, and a switch to decaffeinated could be considered at other times in the day too. webhosting info 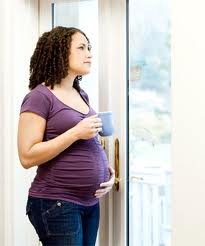