Owning a coffee bar, house or shop is a lucrative business. The Specialty Coffee Association of America estimates that these businesses generate $11 billion dollars in the US in 2005, this even with more than half of coffee drinkers claiming to be occasional rather than daily. If the growing trend of single cup coffee in international areas is any indication of the future, then more coffee providers and cafe’s in the US will be investing into one cup machines.

What Brands do the Coffee Shops Use?

There are many companies producing coffee makers for professional purposes. Capresso manufactures an automatic coffee center that can grind, tamp, brew and clean up in less than sixty seconds. Bunn has plenty of models designed for coffee house use. One of them includes a coffee machine that can brew three pots all at the same time. Bunn is not just famous for commercial coffee makers but home varieties as well. They produce all sorts of sizes and types of coffee machines as well as carafes and air pots. Recently, Bunn started manufacturing single cup pod coffee brewers. 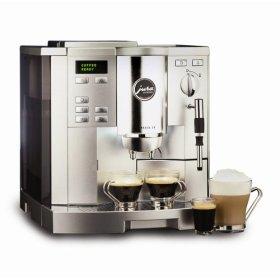 Now several companies are producing equipment to catch up with the growing tend of single serve pod machines. Some of these companies are Senseo, Salton, Krups, Kuerig, Grindmaster and Melitta. Krups even features a coffee machine that can produce two single cups at the same time.

Single cup machines and servings are relatively new in the United States as there is room for growth. Single cup takes up about 5% of the market and is expected to increase to 20-25% in the next decade. The reason for this growth is based on the choice of convenience and taste quality which are important to American consumers.

Another reason for single cup machines is that you never know what you’re getting at 1 A.M. at a coffee house from a pot brewer. The coffee could have been sitting there for quite some time. Coffee houses that are twenty four seven can place ease of mind on customers by investing into a single cup machine. They can be sure the coffee is as fresh as it would be at any other time and also there is no pot for employees to handle as well as no grounds to take care of.

A café could leave the machine on so that customers can get a cup any time of day by self service which is less hassle for the owner and convenience for the customer. This is especially true for the machines that have the ability to be connected to the plumbing so there’s no need to keep refilling the water.