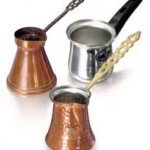 Usually when you read articles in the press about coffee, the articles contain warnings about caffeine consumption and how drinking too much coffee is dangerous for your health. However, there has been recently released research which turns all of this upside down, and has found that drinking any type of coffee, including Turkish coffee,  actually seems to lessen the odds of men developing prostate cancer.

Firstly, this research was done on a large scale, featuring 50,000 subjects who were studied over a 20 year period. The size of the study means that the findings carry more weight than with smaller studies which use fewer participants. The findings were that men who drink at least 6 cups of coffee per day were 20% less likely to develop cancer of the prostate than men who drink no coffee at all. The research also found that there was no difference between men who drank decaffeinated coffee and those who drank regular coffee, showing that caffeine is not the element in the coffee which is having the cancer preventing effect. Even in smaller amounts, between 1 and 3 cups per day, the coffee appears to lessen the risk of getting prostate cancer, one of the most common male cancers in the Western world. The research also found that even when the men had relatively unhealthy lifestyles, smoked, or drank alcohol, the coffee still had the effect of lessening the cancer risk. Although this research seemed to show that caffeine had no effect, other studies have shown drinking coffee containing caffeine to have beneficial effects for asthmatics, and that it can also lessen the risk of Alzheimer’s disease.

Cancer charities were positive in their reactions to these new findings, with most accepting that any new avenue to explore in the battle against cancer is good news. They did however sound a note of caution, saying that other research studies had not reached the same conclusions and that more research has to be done to find out how the coffee is affecting the body and which chemicals are lessening the cancer risk. Charities also cautioned against men suddenly taking up drinking lots of coffee until the medical benefits are proven one way or the other. The study also did not differentiate between the different sorts of coffee that men in the study were drinking, so it is still not known whether all sorts of coffee have similar benefits, or whether various types of coffee have different effects. More research is likely to be underway soon, but most studies of this type are run over many years so it is unlikely that there will be any firm recommendations based on this research issued to men any time soon.